skip to main | skip to sidebar

Lumbini
Lumbini is the place where the Buddha, known as the Tathagata* was born. It is the place which should be visited and seen by a person of devotion and which should cause awareness and apprehension of the nature of impermanence. (*Tathagata - One who has found the Truth.) 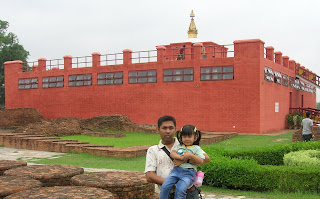 The birthplace of the Gautama Buddha, Lumbini, is the of every Buddhist, being one of the four holy places of Buddhism. It is said in the Parinibbana Sutta that Buddha himself identified four places of future pilgrimage: the sites of his birth, enlightenment, first discourse, and death. All of these events happened outside in nature under trees. While there is not any particular significance in this, other than it perhaps explains why Buddhists have always respected the environment and natural law. 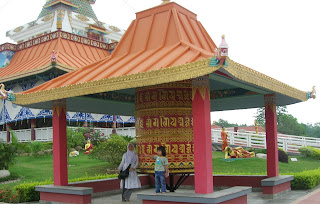 is situated at the foothills of the Himalayas in modern Nepal. In the Buddha's time, Lumbini was a beautiful garden full of green and shady Sal trees (Shorea). The garden and its tranquil environs were owned by both the Shakyas and Kolias clans. King Suddhodana, father of Gautama Buddha was of the Shakya dynasty belonging to the Kshatriya or the warrior caste. Maya Devi, his mother, gave birth to the child on her way to her parent's home in Devadaha while taking rest in Lumbini under a sal tree in the month of May in the year 642 B.C. The beauty of Lumbini is described in Pali and Sanskrit literature. Maya Devi it is said was spellbound to see the natural grandeur of Lumbini. While she was standing, she felt labor pains and catching hold of a drooping branch of a Sal tree, the baby, the future Buddha, was born.In 249 BC, when the Emperor Ashoka visited Lumbini it was a flourishing village. Ashoka constructed four stupas and a stone pillar with a figure of a horse on top. The stone pillar bears an inscription which, in English translation, runs as follows: "King Piyadasi (Ashoka), beloved of devas, in the 20 year of the coronation, himself made a royal visit, Buddha Sakyamuni having been born here, a stone railing was built and a stone pillar erected to the Bhagavan having been born here, Lumbini village was taxed reduced and entitled to the eight part (only)". 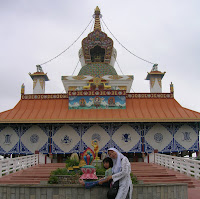 Lumbini remained neglected for centuries. In 1895, Feuhrer, a famous German archaeologist, discovered the great pillar while wandering about the foothills of the Churia range. Further exploration and excavation of the surrounding area revealed the existence of a brick temple and a sandstone sculpture within the temple itself which depicts the scenes of the Buddha's birth.
It is pointed out by scholars that the temple of Maya Devi was constructed over the foundations of more than one earlier temple or stupa, and that this temple was probably built on an Ashokan stupa itself. On the south of the Maya Devi temple there is the famous sacred bathing pool known as Puskarni. It is believed that Maha Devi took a bath in this pool before the delivery. By the side of the Ashoka pillar there is a river which flows southeast and is locally called the 'Ol' river. In 1996, an archaeological dig unearthed a "flawless stone" placed there by the Indian Emperor Ashoka in 249 BC to mark the precise location of the Buddha's birth more than 2,600 years ago, if authenticated, the find will put Lumbini even more prominently on the map for millions of religious pilgrims.
Recently, several beautiful shrines have been built by devotees from Buddhist countries. A visit to Lumbini, the birthplace of Buddha, is not only for spiritual enlightenment but also for solace and satisfaction that one gets in such a calm and peaceful place.

Posted by Hasbi Assidiqi at 1:45 AM 10 comments: Links to this post 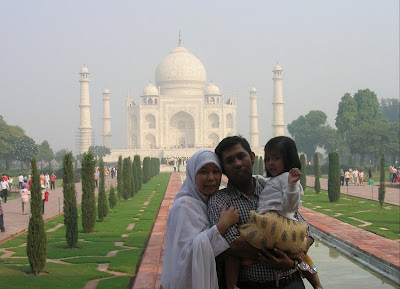 What the statue of Liberty is to America, the Pyramids to Egypt, the Leaning Tower of Pisa to Italy and of course the Borobudur to Indonesia, The Taj Mahal is to India.... This country's famous architectural wonder.
Universally, it is one of man's proudest creation and easily the most familiar image to be associated with the rich civilisation and magnificent editifices of India. Almost by it self, the taj has put Agra and India on the world map, being a building designed by giants and finished by jewellers as it were.
Its curving, gently-swelling dome, the four minarets pointing to the sky and the square base upon which it rest so lightly have appeared more often than any other monument on travel brochures araound the world. When tour operators anywhere talk about selling India, they start by talking about the Taj. As a result, the Taj is the biggest and most rewarding attraction in India to tourist from every where. Nobody who has seen this monument after braving the harsh India sun and the narrow, dusty streets of Agra, has gone back without being struck by its wonder
Architecturally, the Taj is one of the earliest mentioned of the world's eight wonder. A perfect building, flawlessly, proportionate, and made entirely of marble. A gigantic, glistening white pearl dome stands supported by four corner pillars from which flow the rivers of grace. The massive square on which the Taj stands, represents that material universe, the octogonal main edifice stands for the transitional phase, while the dome itself symbolises the vault in heaven. In other words, the dome unites heaven and earth. 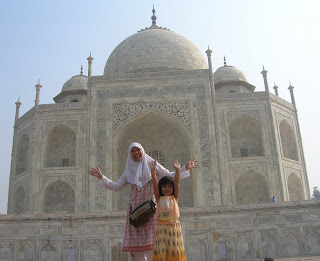 The Taj is renowned as much for its structural magnificence as its aesthetic beauty. It is marked by summetry and balance. In the shape of four minarets, the cuppolas, the arch set within the rectangle, the marble inlay platform, the red sandstone walks that lead up to the mausoleum. Even the mosque and the guesthouse to the right and left of the Taj are mirror image of one another. Leading historians have acknowledged tha this architectural beauty can never be surpassed. Nor can it be adequately described. Its extreme grandeur can only be appreciated. Not Meausured....
The Taj was built over a period of 22 years from 1632, as a tribute to a beautiful woman and as a monument for enduring love by the Mughal Emperor Shah Jahan. Plunged into grief by the death of his biloved wife, The empress Mumtaz Mahal, Shah Jahan had the Taj constructed to enshrine her mortal remains and be a centre of pilgrimage. The monument is islamic architecture at its purest. As a tomb, it has no match in the world, because mortal remains have never been housed in such majesty. The Tomb has been ornamented not just by precious stones, but also by splendidly calligraphed verses from Qur'an. The incription on the massive front gate reads :

" O soul that art at rest
Return to the lord
at peace with Him and He at peace with you.
so enter as one of His servants and enter into His garden. "
The amazing thing is that despite the commanding height of the Taj, 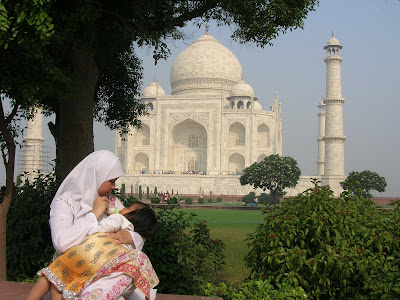 these inscriptions seem to get no smaller as they go up. Top to bottom, they retain the same proportions. It might seem like an optical illusion, but actually the size of the letters was gradually heightened as their distance from the increased. From the ground, therefore, the dimensions of the inscriptions seem the same at every point.
If you have already visited the Taj in Agra during trip to India, and paid your obeisance to this extraordinary memorial of love, the you will understand why its romance has survived more than three hundred years to still remain the story of our times No visit to India is complete without an expedition to Taj Mahal. It has taken hundreds of thousands of millions of lives to sustain the great monument and make it one of the most visited tourist destinations of the world. 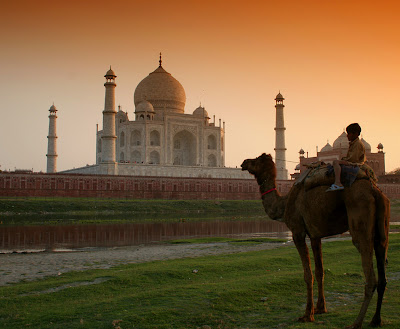 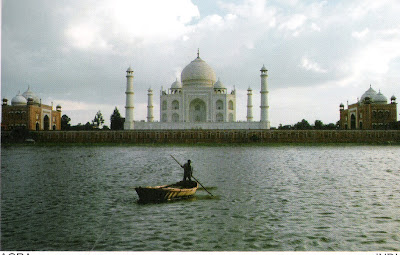 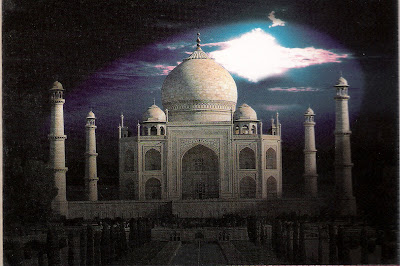 Posted by Hasbi Assidiqi at 10:51 PM 20 comments: Links to this post